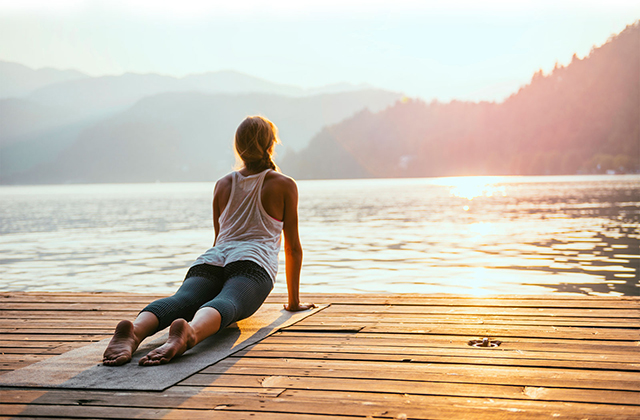 If you get a Pilates instructor course you will work closely with a diverse range of people to teach the Pilates exercise method and bringing good health and well-being to many people. A step-by-step guide to performing effective yoga boll core exercises to strengthen the stomach muscles and thereby enhance one’s posture.

Sit on the ball with feet flat on the ground. Carefully lean back so that the back, shoulders, and tailbone touch the ball. Position the legs to create a 90-degree angle at the knees. Make sure the thighs are parallel to the floor and separated hip-width apart. Distribute weight evenly through the feet. Place the middle back on the ball.

Place the hands behind the head. Squeeze the shoulder blades closer together while pulling the elbows back. Squeeze the stomach muscles and flex the chin near the chest. Slowly bring the torso up as though about it will touch the thighs.

Then slowly lower the torso back onto the ball in a controlled way by keeping the feet firmly grounded in the floor and having the lower back and tailbone keep touching them boll. Perform between 30 to 50 repetitions.

Kneel facing the yoga boll. Interlock the fingers, putting the forearms on the boll, making the ball roll near the body. Roll the boll using the arms while making the body form a straight line. Squeeze the stomach muscles and roll back into the beginning position. Repeat this exercise between 15 to 60 times.

Stand with the feet separated shoulder-width apart. Place the ball between the wall and one’s lower back. Bend the knees and lower the body five to ten inches. Keep the shoulders even and the hips square while doing so.

Hold the position for three seconds before standing up again. Repeat this exercise between five to 12 times.

Hold the ball while standing with feet separated hip-width apart. Pick the ball up over the head by raising the arms near the ears. Squat while keeping the arms raised and the body weight in the heels.

Remain in this squatting position for a few seconds. Then straighten the body again by standing up, keeping the arms lifted for 12 to 15 total squats.

Start by lying on the back while holding the boll. Lift the legs and feet so that the knees are bent and the shins are parallel to the floor below. Lift the head, neck, and shoulders off the ground and put the boll between the legs. Then lower the legs near the ground while stretching the arms back. Come up once again. Hold the ball while lying on the back and place the legs onto the floor. Read more on how to stretching your arms develop your core.

Keep passing the ball from the hands to legs for 10 to 12 total rounds.